The BritRuby Conf has just been cancelled in the middle of a internet shitstorm.

At the root of all this lies a controversy about gender and ethnicity of the speakers, in fact, the complaint was about all of the speakers being male and white.

I have been taking part in the organization of several conferences, and I think I have an informed viewpoint I would like to offer:

The average web technology conference does not reject women's proposals, you receive from none to very few proposals from females. Are they shy? no, they are demographically underrepresented among developers. They are also less likely to be borne by their employers to attend conferences, because of labor inequalities completely outside the reach of your conference organizer.

When you actively seek, write and invite women, you get some proposals, in our case, the year we tried to bring female devs to the spotlight we got 40% of speakers, but 10% of atendees. If you tell this to a Sociologist she might tell you that women were overrepresented in the panel, but there weren't any tweets with complaints about it.

But what I find more annoying is that any other time, when I have reviewed proposals, I have checked te name in case the person was someone 'famous' which ability to deliver, comunicate, attract atendees and sponsors was well known, because as an event organizer this is what you have to do.

Any other case, if the person was an unknown gender-nondescript twitter handle, we never asked for a photograph, birth certificate or a picture of their freaking genitalia. It was the content relevance what was checked. And you know what? most of them were indeed european males, because I live in Europe and most web developers are 81.6% men (see).

Is it a problem that women are not (generally) engaging in the making of the web: yes, but I don't think the solution is to pretend it is not so, or to show otherwise at a conference.

My choice is to personaly encourage, coach and train tech friendly girls from my environment into further knowledge of web making skills.

Do you have a better idea? Do you think I am wrong? Do you own a vagina offended by my opinion? Please go ahead and tell me, comment, tweet me.

UPDATE: I have edited many references to women/females as 'girls' which spanish equivalent has not the same connotative load. Thanks Sven.
Posted by Oinak at 10:55 PM 1 comment: Links to this post

Moustaching for fun and non-profit

This year I have enrolled on Movember,

which is a campaign of non-profit raising of funds and awareness of male health problems tha has gathered EUR €14,495,742 at te time of this writing. You can check my progress and/or donate to my moustache growing efforts at: http://mobro.co/oinak however, the current state of affairs (in case you suffer severe link-click slackery) is this:

and yes, that is my moustache pride face.

Any case, what you might find more interesting (in case you are so mean that you want cancer to win and kill everybody which is true unless you are donating right now, yes now, I will wait) is not the picture, but the way is taken:


The script can be found at https://github.com/oinak/movember where you can see it is a variation on a @porras original.

What I liked a lot is that with this script, the pictures are under version control, sort of one evolving picture instead of an array of them.

I hope you will find the campaing appealing and the script interesting, if you improve over it don't forget to send me a pull request.

Hairy Cheers to everyone

Posted by Oinak at 9:38 PM No comments: Links to this post 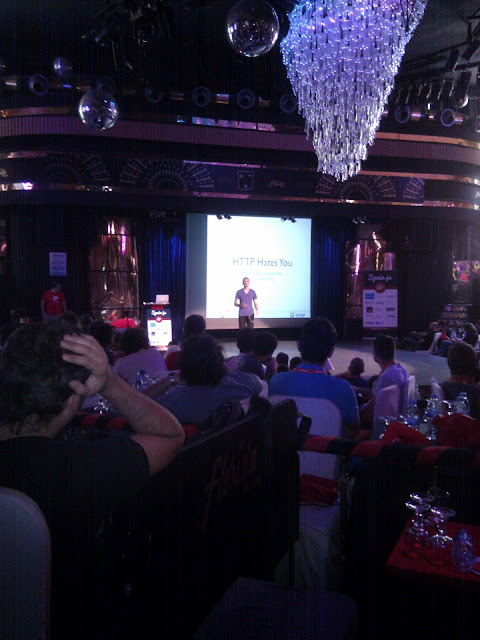 In case you weren't there, shame on you!, if you were, I hope you liked it, and I hope that you join Aprodeweb for the next adventure if you think you know how to do better, you know, and share the  hailstorm next time.
Posted by Oinak at 2:56 PM 3 comments: Links to this post

To be a dad

The last forty weeks have been the takeoff runway for what will be the biggest of my adventures.

There's no mountain I have climbed, no river rafted, no cave crawled, no combat won or lost that could ever be computed to the feeling of holding your newborn for the first time.

I tend not to dive into too much detail about my personal life here, but this is a milestone that's too significative to go unaccounted for.

I am now the proud, and terrified father of a little girl named Ainara.

Just in case you are considering the dissemination of your DNA yourself I might warn you that it's not for the faint of heart. The fact that everybody seems to do it may led you to the wrong conclusion that it is easy, but it's not. It will happen when you are not ready yet, or make you wait for years when you are finally ready.

Now I just have to bear with baby milk bottles, napkins and sleep deprivation, but before me lies a mined path of piercings, tattoos, bad grades and creepy boyfriends...

Now that I face this literally life changing challenge, all the others seem less frightening... or something. 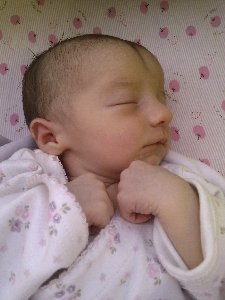 Posted by Oinak at 11:45 PM No comments: Links to this post


There were plenty of vim showoff there on the talk, but one of the neat tricks caught my eye, and today I have used it for the first time, so here it is for you all to discover and hopefully for me to remember:

Macros are one of Vim's most famous and least used (by beginners) features. As you progress along the path of Vi/m you start using them more often to avoid repetitive chores and menial tasks.


So far so good, but until now, if I was making a macro and got wrog, I had to start over and record a new one, Ben showed us better:

On a side note, what I was doing today was edit teh configuration for a new pluging I saw at vim.org. It is called CtrlP ang gets right everything control-t and Fuffile got wrong, so I recomend you to give it a try. You might need to tweak uo the highlights, depending on your colorscheme, so I leave the relevant doc reference here for your convenience:

Posted by Oinak at 11:56 AM No comments: Links to this post

The second day of Railsberry came and exploded in all its glory. The concerns I had the first day, mainly about the dimension vanished as the event fitted in place.

This second day was crazy and amazing. Linda Liukas talk about Rails Girls project and Xavier Noria's talk about Rails Contributors were both really touching and remembered me about how special is this communnity.

Yehuda Katz gave a very interesting speech about different kinds of unknowns and how the framework should take care about them to leave the developer the creative part of the task. With it he deffended Rails versus suposedly faster or lighter approaches.

Josh Kalderimis talked about crowdfunding experience with Travis-CI in yet another example of people giving away just to makes others' lives better.

Aaron Patterson gave a hug to everybody before he start talking about his homemade pepperoni curating device which finally was an elaborated fable about the tight coupling. 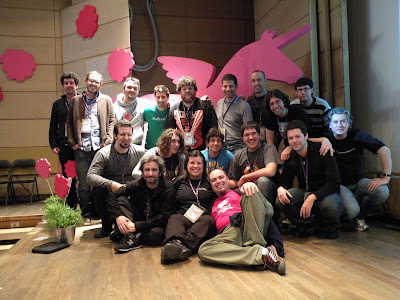 Posted by Oinak at 12:44 AM No comments: Links to this post 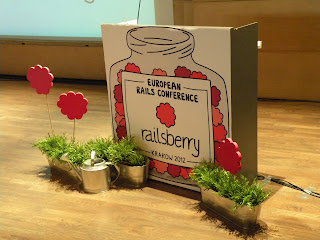 The first day of RailsBerry came and went. It was really awesome for the most of it but find it difficult to concentrate on the awesome part throught the fact tha wi-fi was crappy for most of the people and non-existant for me.

It is very sad to be in such a social and real-time event as a conferente and not be able to share your thoughts, read what others say on twitter, and so on.

The little details that make a conference great are there, it has good speakers, original and lovecrafted image and theme, unlimited coffee, parties, food, coke, whatever.

Read more »
Posted by Oinak at 8:28 PM No comments: Links to this post

Safe and sound at Krakow

After getting up absurdly early and a just standarly uncomfortable flight with ryanair I have arrived at Kraków to attend www.railsberry.com

I am very happy to be back at this beautiful city and to have some abroad action that I will lack in the upcoming months.

There won't be Euruko for me this year and the Conferencia Rails has evolved to a js centered frontend event , so this is going to be The Rails/Ruby event this year.

I hope to see a lot of people from the Spanish Ruby community that are currently living abroad and update on some interesting Rails matters. 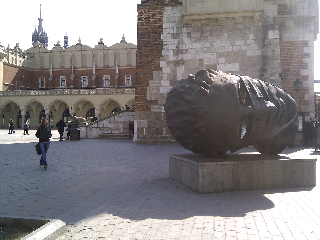 Posted by Oinak at 3:32 PM No comments: Links to this post